LEGAL FRAMEWORK OF INCOME FROM ABROAD TAXATION -Position of “Freelancers” 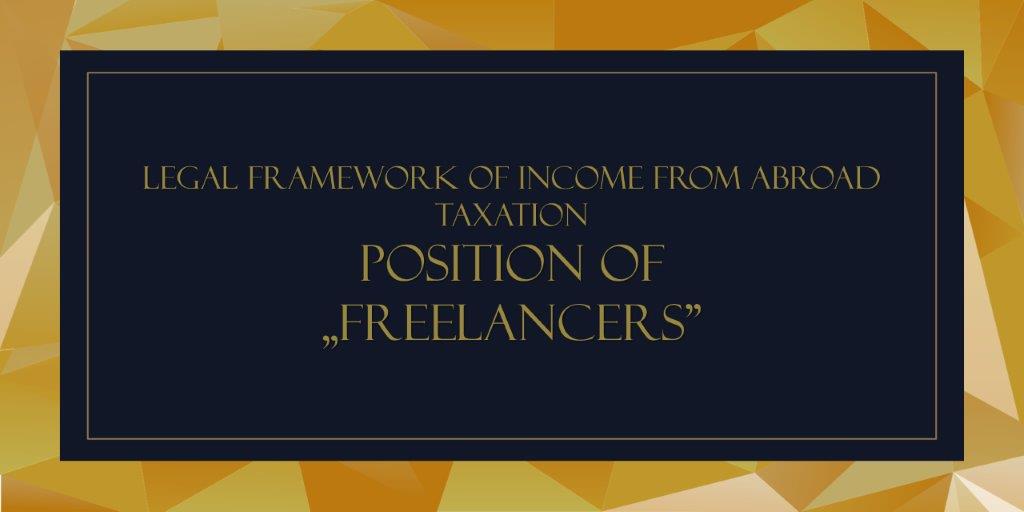 Having in mind the current reactions caused by the actions of the Tax Administration, and regarding the taxation of income from abroad, we hereby draw attention to the Legal Framework of Income from Abroad Taxation, in order to explain the procedure itself, which is envisaged by law.

I) Who exactly are “freelancers”?

The existence of “freelancers” in our country is nothing new, however, lately more and more focus has been placed on them, especially when it comes to taxing their earned income, which mostly comes from abroad.

What do “freelancers” actually do? Namely, “freelancers” are usually self-employed, or employed according to a certain project, employment contract, etc. most often in the IT sector, but they can also be translators, designers, marketing experts, writers of creative content, or so-called “Bloggers”, who provide various services to their clients. They can provide software development services, foreign language classes, promotion, graphic design, game development and development services, and find jobs on numerous internet platforms, which are used for professional networking and training.

“Freelancers” have the opportunity to dictate their working hours, to work on projects when, how and how much they want, as well as to determine the compensation, that is their fee for the time spent at work. On the other hand, in addition to the many advantages, there are a handful of obligations and responsibilities that come with this way of generating income. One of perhaps the most important is the subject of our legal analysis, and that is the payment of income tax, which in accordance with legal provisions, obliges all individuals to pay personal income tax, which is paid on income from all sources, except those that are specifically exempt by law.

At first, we emphasize that the currently valid Law on Personal Income Tax (hereinafter: “LPIT”) has been in force since 2001, and that Art. 6. of LPIT stipulates that the taxpayer is a natural person, who is obliged to pay taxes under this law.

When it comes to the manner of determining and paying taxes in the case of Serbian “freelancers“, LPIT in Art. 100a defines the income on which the income tax is determined and paid according to the principle of self-taxation. In this case, the taxpayer, who earns salaries and other income in, or from another country, at a diplomatic or consular mission of a foreign country or international organization, or at a representative and official of such a mission or organization, is obliged to calculate and pay taxes deduction under the provisions of this law, if the tax is not calculated and paid by the payer of income. The above would mean that “freelancers” are obliged to report income tax themselves by submitting a tax return to the competent tax administration, which will be explained in more detail below in our legal analysis.

In our further analysis and setting of the legal framework for taxation of income from abroad, we must first explain one of the most important institutes in our legal order.

The institute of Statute of limitations, as one of the most important institutes in our legal order, is present in various branches of law, and it actually represents the obsolescence, i.e. disappearance or inalienability of a certain right due to non-use by the titular.

According to the above, according to the currently valid “Law on Tax Procedure and Tax Administration” (hereinafter: “LTPTA“), one of the ways to terminate the tax debt is the statute of limitations on the right to determine and collect taxes and ancillary taxes. This is envisaged in Art. 114. of LTPTA and stipulates that the right of the competent tax authority to collect the tax liability expires in five years from the day when the statute of limitations started, i.e. expires from the first day of the following year from the year in which the tax debtor’s obligation fell due.

On the other hand, in addition to this relative statute of limitations, which is defined in Art. 114 of the LTPTA, in Art. 114ž paragraph 1 it is also envisaged a general absolute statute of limitations of 10 years, which defines that the right to determine, collect, refund, tax credit, refund, refund and settlement of due obligations by transferring taxes, always expires within ten years from the end of the year in which the tax should have been determined or collected, i.e. in which the subscription was made, unless otherwise prescribed by this Law.

In this regard, we note that the competent tax authority in each case controls and determines the factual situation regarding the payments in question, determines whether there is more or incorrectly paid tax, as well as whether, at some point there was an interruption of the statute of limitations and whether, in connection with that, the tax liability became obsolete.

In accordance with the above, in the conclusion of this part it follows that due to the statute of limitations there will be a termination of the tax liability if in a period of 5 years, from the first day of the following year of the year in which the tax was to be determined, or in which the obligation is due for payment, there is no interruption of the statute of limitations.

Now that we have laid the foundations of our legal analysis, we can turn to the issue of filing a tax return before the competent body of the tax administration. Namely, the tax return with calculated tax for which the obligation of self-taxation has been determined in accordance with the LPIT, is submitted within 30 days from the day of income realization, while the payment of taxes and related contributions is made no later than the deadline for submitting the return.

In accordance with the LPIT, the tax return is submitted in electronic form (with an electronic signature), or in writing, by mail, or directly to the competent Tax Administration, which is determined by the residence of the taxpayer.

However, the procedure for filing a tax return is not sufficiently known to the general public, and a light understanding of these actions can lead to very serious consequences due to the fact that the Tax Administration, in addition to initiating the procedure of determining tax liability, must initiate misdemeanor or criminal proceedings. Art. 180. of LPIT defines cases that are considered tax offenses by taxpayers – natural persons, and a fine is envisaged for them, which can be imposed in the amount of 5,000.00 to 150,000.00 RSD. However, if the amount of undeclared tax exceeds the amount of 150,000.00 RSD, criminal proceedings will be initiated in which, depending on the gravity of the crime, ie the amount of tax, a prison sentence may be imposed.

However, in relation to all doubts that taxpayers may have when filing a tax return, the taxpayer in accordance with the LPIT has the right, first of all, to receive free of charge from the Tax Administration information on tax regulations from which his tax liability arises, and if ignorant and basic legal aid, which allows him to report and pay taxes and calculate and pay ancillary taxes, in accordance with regulations, as well as all other rights prescribed by Art. 24. of LPIT.

In accordance with all the above, it indisputably follows that “freelancers” are obliged to report, determine and pay income tax, both in the country and abroad, and that in the application process they can rely on the service of the tax administration, if they have any doubts and questions.

Also, we emphasize that retroactivity is prohibited by the Constitution of the Republic of Serbia, as well as that the tax administration is obliged to determine the tax liability on the basis of regulations that were in force at the time of its creation unless, in accordance with the constitution and law, the provisions of the law are intended to have retroactive effect, as well as that the actions in the tax procedure are regulated by regulations, which are in force at the time when they are taken.

Considering that the amendments to the LPIT law, according to which “freelancers” have to pay taxes, is in force for five years, it is certain that there is a significant number of those who did not fulfill their tax obligations in due time, and that in these cases misdemeanor and criminal proceedings will probably be initiated in order to enforce the collection of income tax.