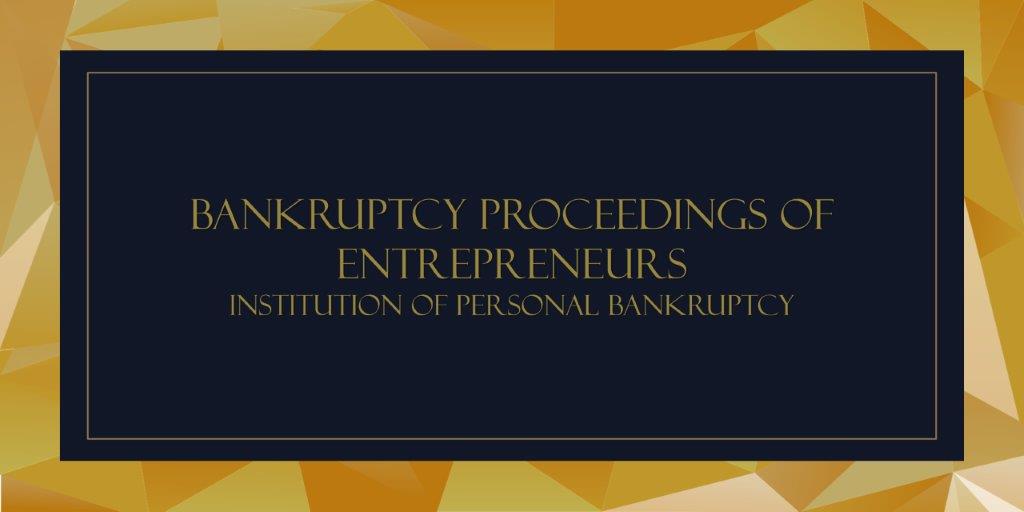 Having in mind the current situation in our country, caused by the Covid-19 virus pandemic, we can indisputably conclude that there have been great changes in the economy, both in our country and around the world. The problems that the economy in the Republic of Serbia is facing are very challenging, despite the packages of measures to help the economy and citizens that have been adopted so far.

For these reasons, now more than ever, the focus is on Entrepreneurs and their responsibility, which is determined by their position in our country. In the previous period, unfortunately, it is noticeable that an increasing number of Entrepreneurs submitted a registration for deletion or termination of activities in the Agency for Business Registers of Republic of Serbia, most often in order to avoid over-indebtedness.

I) The position of the Entrepreneur

According to the Article 83 paragraph 1 of the Company law it is envisaged that the Entrepreneur is a legally capable natural person who performs activities for the purpose of generating income and who is registered as such in accordance with the Law on registration. The law further in its Art. 85. stipulates that the Entrepreneur is liable for all obligations arising in connection with the performance of his activity with all his property and that property includes the property he acquires in connection with the performance of activity, and that the responsibility for obligations referred to in paragraph 1 of this Article does not cease to exist by deleting the Entrepreneur from the Agency for Business Registers of Republic of Serbia.

The institution of personal bankruptcy is also present in American (Anglo-Saxon) law, as well as in German (European-continental) law, whose concepts basically have a few similarities and key differences.

Namely, in the Anglo-Saxon system, when an individual falls into a debt crisis, he hands over all his property to the commissioner, while after the end of the bankruptcy proceedings, the debts are written off.

On the other hand, in the European-continental model, the debtor is handed over to the supervisor, the debtor’s assets that are not exempt by law are sold and the debtor continues to work and repay his debts to the bankruptcy proceedings creditors. The goal of this institute is to accomplish the reorganization of the debtor, ie. giving the debtor the opportunity to continue working and thus settle his creditors, and then get a chance for a fresh start.

1) the creditor who initiated the procedure agrees with that;

2) the bankruptcy debtor proposes it himself;

3) it is probable that the determination of personal administration will not lead to damage to the interests of creditors or to the extension of the bankruptcy procedure.

If the bankruptcy proceedings have been initiated by the competent public prosecutor, the personal administration cannot be approved.”

The goal of regulating the bankruptcy proceedings of Entrepreneur is to find an effective solution for their over-indebtedness and to provide them with the possibility for financial rehabilitation, since their current position is somewhere between a natural person and legal entity.

What after this pandemic? Will the end of the pandemic lead to a decline in the number of Entrepreneurs or will the position of over-indebted Entrepreneurs be regulated and improved by then, if we take into account that the bankruptcy proceedings of Entrepreneurs and personal bankruptcy are still new in our law, and that we have not yet reached a sustainable solution for their over-indebtedness ..? Undoubtedly, this remains an open question, since it is uncertain how long it will take for this institute to take root in our law and enable over-indebted individuals the opportunity for a new financial start.