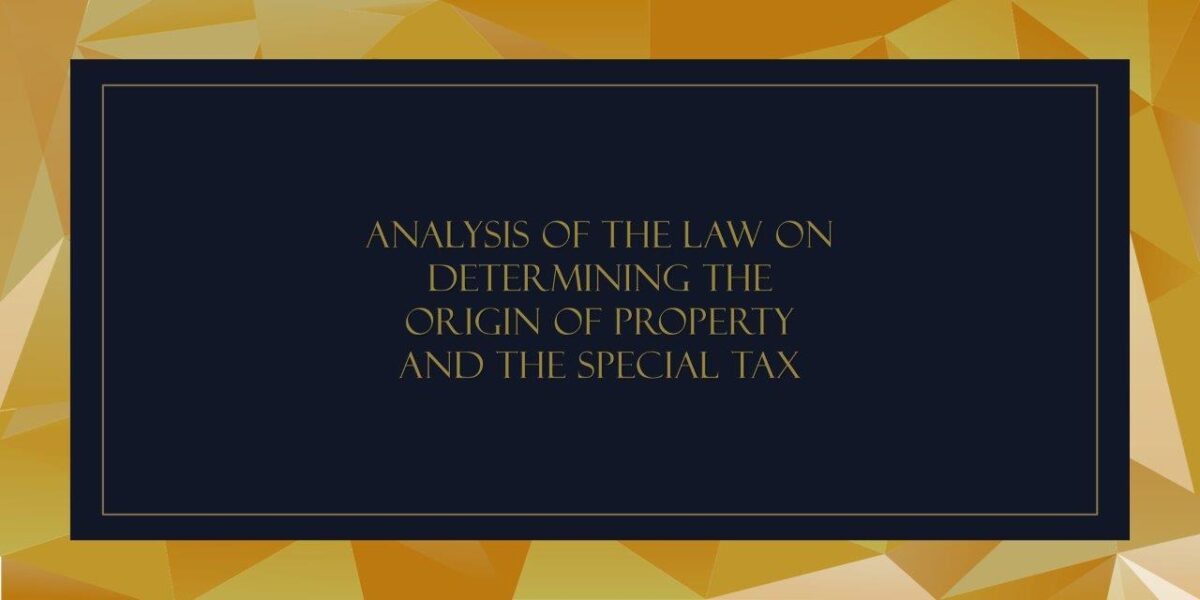 The Law on Determining the Origin of Property and Special Tax (hereinafter: “the Law“) was adopted by the National Assembly of the Republic of Serbia on February 29, 2020 and began to be applied on March 12, 2021.

I) Competence and cooperation

The Law stipulates that the Tax Administration is responsible for conducting the procedure of determining property and special tax in accordance with this Law, in which a special organizational unit is formed for performing the tasks determined by this Law. (hereinafter: the “Tax Administration Unit“).

Namely, the Tax Administration Unit, when conducting the procedure for determining the property, takes into account everything that makes up the property of a legal entity or a natural person, and has the right to inspect and obtain data from all types of records and data kept by the competent authorities and others on:

1) immovable and movable property, economic entities, financial instruments, savings deposits and accounts with commercial banks, as well as other records and data from which the property of a natural person can be determined;

2) business books and documentation of companies and other persons, for the purpose of determining the property of a natural person.

Also, this Law envisages another form of cooperation between the Tax Administration and other state bodies for the purpose of more effective tax control and achieving the fiscal goals of the state.

What is interesting is that all employees in the Tax Administration Unit are obliged to submit to the Agency for Prevention of Corruption (hereinafter: “the Agency”), in writing, complete and accurate data on their assets, which are recorded and checked, according to the law governing the work of the Agency. This actually means that the tax control will first be passed by those who will further perform tax control, which will determine their impartiality.

The authorities obliged to designate one or more liaison officers are:

3) Directorate for Prevention of Money Laundering;

4) Agency for Prevention of Corruption;

II) Stages of the proceedings

When it comes to the stages of the procedure, in our further analysis of the Law we will explain the procedure for determining the property and special tax, which is initiated and conducted ex officio, and which consists of:

The preliminary procedure is conducted in order to determine the increase of assets on the basis of all data available to the Tax Administration Unit and those collected from other state bodies and organizations, legal entities or natural persons, which are further compared with reported revenues in a certain period.

The provisions of the Law on Tax Procedure and Tax Administration (hereinafter: “LTPTA”) are accordingly applied to the work of the Tax Administration Unit, and the control procedure is initiated when in the previous period it seemed probable that in a maximum of three consecutive calendar years in which a natural person has an increase in assets, there is a difference between the increase in assets and reported income of a natural person, which is greater than EUR 150,000 in dinars at the middle exchange rate of the National Bank of Serbia on the last day of the calendar year.

From the before mentioned we can conclude that the Tax Administration Unit will check the property, its value and origin, by reviewing in detail all submitted tax returns and tax balances, accounting reports, as well as other data from other records and databases, based on submitted data from by those who are defined in Art. 7. of the Law.

At this stage of the procedure, the provisions of the LTPTA are also applied accordingly, in which the illegally acquired property of a natural person or a legal entity is determined, as well as its value.

In case that the Tax Administration Unit initiates proceedings against a natural person or a legal entity, they have the right to participate in the control procedure, ie in this case the burden of proof, in accordance with the provision of Art. 3. of the Law is defined so that the burden of proving the increase of property in relation to the reported income of a natural person is on the Tax Administration, while on the other hand it is up to the natural person to prove that he has legally acquired the property in the part in which the increase of his property is not in accordance with the declared income.

If a fact, which indicates the existence of grounds for suspicion that a crime has been committed, is established during the tax control, the inspector informs the police, public prosecutor’s office and other competent bodies, which accompany him in the process of creating a more efficient tax system.

Finally, in the control procedure, the Tax Administration Unit is obliged to make a Record on the performed control, to which the provisions of LTPTA are applied accordingly, and to make a decision on determining the special tax after the end of this procedure, if it determines that the property was not acquired legally.

III) Tax base for special tax and tax rate

Article 16 of the Law further defines the special tax for the entire period of tax control, namely the application of the special tax rate of 75% on the tax base, which is determined according to this Law.

Summarizing our analysis of the Law, in the end we draw attention to the penal provisions defined in Art. 25. of the Law, which stipulates that for a misdemeanor of failure to submit data at the request of the Tax Administration Unit, within the period determined by the Tax Administration Unit, a legal entity may be fined in the amount of 500,000 to 2,000,000 dinars, while an entrepreneur for this same misdemeanor may be fined a fine in the amount of 100,000 to 500,000 dinars.

For this same misdemeanor, a fine in the amount of 50,000 to 150,000 dinars may be imposed on a natural person and a responsible person in a legal entity, a state body and organization, an authority of an autonomous province and a local self-government unit and a holder of public authority. Also, a fine of 50,000 to 150,000 dinars will be imposed on a natural person who does not keep confidential the data obtained in the procedure of determining property and special tax (provided for in Article 24 of the Law).